As Mayor of the City of Heidelberg it is my great pleasure to warmly welcome you to the European Medical Students’ Congress in Heidelberg. I am delighted that more than 300 medical students from all over Europe have come to our beautiful city.

As members of the European Medical Students’ Association (EMSA), the European organisation representing medical students pursuing their studies in Europe, you have gathered here in Heidelberg for your Spring Assembly 2019. You will be given the opportunity to vote for a stand at the EMSA pertaining to relevant medical issues, as well as to plan for projects with students from all over Europe. In addition, you will establish contact with other medical students. I believe this exchange of ideas with like-minded individuals paves the way for new horizons – be it through forging lifelong friendships, enjoying several beautiful days or engaging in interesting discussions.

I am particularly pleased that the EMSA Heidelberg, which represents the interests of more than 4000 students from the Heidelberg Medical Faculty, is organising the first of two EMSA congresses this year. This will give you the opportunity to get to know Heidelberg and, hopefully, you will have some free time before, during or after the congress to explore our beautiful city.

Heidelberg has a very high reputation and a long tradition in the field of medicine. It is one of the centres of cutting-edge research in Europe. Its university is among the top 50 universities in the world and a frontrunner in many national rankings. The high reputation of Heidelberg as a research location is due to high-performing research clusters and renowned research institutes, such as the German Cancer Research Center, the European Molecular Biology Laboratory or the four Max Planck Institutes.

I wish you a pleasant stay in Heidelberg. May your experience here be filled with captivating presentations, meaningful discussions, insightful conversations and, of course, plenty of fun and enjoyment as you discover our city.

The city of Heidelberg is located in south-west Germany. It has a population of about 160.000 people, approximately a quarter being students. Heidelberg is the fifth-largest city in the German state of Baden-Württemberg. It is situated at the Rhine Rift Valley on the side of the Neckar river, bordered by the Königsstuhl (568m) and the Gaisberg (375m) mountains.

Heidelberg is a very attractive city for tourists from all over the world. Especially the old town (German: Altstadt) has a lot to offer. A mile-long pedestrian street, the Main Street (Hauptstraße) with many shops and restaurants, stretches out from the Bismarckplatz (the central bus station) all the way through the old town to the Karlstor, a triumphal arch from the 18th century in honor of the Prince Elector Karl Theodor. Walking along the Main Street, one can already notice some of Heidelberg’s sights: the Providenz Church, the Marktplatz with the Church of the Holy Spirit and the town hall, the house Zum Ritter St. Georg (Knight St. George, the oldest house in Heidelberg, built in 1592) and the university square – just to name a few.

The old part of the town is dominated by the ruins of Heidelberg Castle 80 meters above the Neckar on the Königsstuhl hill, built in a mix of styles from Gothic to Renaissance. Its first building was built in the 14th century as a royal residence. Throughout the following centuries, more buildings were erected by the Prince Electors and the fortress was turned into a castle. During the Thirty Year’s War and the Palatine War of Succession, the castle and its garden were destroyed several times. In 1764, as Prince Elector Karl Theodor tried to restore the castle, a lightning struck and ended all attempts to rebuild it. Later, stones from the castle were misused to build new houses in Heidelberg. This was stopped in 1800, and the preserving of the castle began. Today, the ruin is not only a tourist spot, but it is also used for dinner banquets, balls and theatre performances (and as I heard, also for some amazing EMSA activities!). The Heidelberger Bergbahn funicular connects the old town and the castle, but it is also fun walking up there. The view over Heidelberg and the Neckar from above is fantastic!

To get from the old town to the northern part of Heidelberg, you can cross the famous Old Bridge (Alte Brücke), a stone bridge erected in the 18th century. The medieval bridge gate on the southern part of the Old Bridge was originally part of the town wall.

On the other side of the Neckar is the Heiligenberg (Saints’ Mountain). Along its side runs the Philosophers’ Walk, a two-kilometer-long path, which is quite steep in the beginning, but is later presented with beautiful terraces and gardens and a stunning view over the river, old town and castle. There are two possible ways to start this route – one from the district Neuenheim (go to the Bismarkplatz, cross the Neckar and take the streets to the right side, bringing you further to the hill), the other is the Schlangenweg (Serpents’ path), starting at the north side of the Old Bridge.

After the quite exhausting walk up the hill and back down (don’t wear heals!), where else could you relax better than at the riverside (Neckarwiese)? Especially in summer, lots of students and families enjoy the free time in the sun there.

Another popular spot for students is the Marstall (stables), a 16th century building, today one of the university cafeterias with many activities and good cocktails. If you are looking for more drinks, many bars are located in Heidelberg’s Untere Straße, as well as in the narrow streets at the rear old town.

Those were only the most famous places in Heidelberg. Come and find out more yourself!

If you still want to explore more, there are interesting places to visit in within Heidelberg’s vicinity surroundings. The Neckar flows into the Rhine in the city of Mannheim, 22 kilometers in north-west  in the city of Mannheim direction. Mannheim is a university city, almost twice as big as Heidelberg, with thea beautiful Mannheim Baroque castle Palace and many shopping opportunities. Half way to Mannheim is Ladenburg, an old town on the Neckar bank, whose centreer dates back to the Late Middle Ages. North-east of Heidelberg is the Odenwald, a low mountain range with a forest, small villages, steams and castles. A popular tourist destination is also Also popular is the Bergstraße, an 80- kilometer-long ancient trade route along the western edge of the Odenwald.

We hope you got an overview of our beautiful city and will find it as charming as we do! 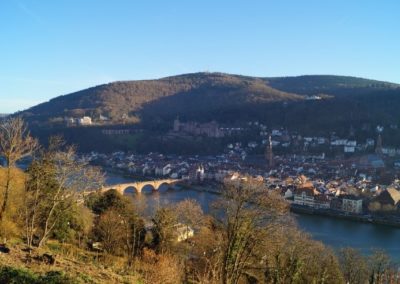 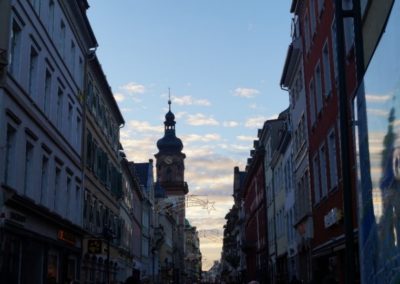 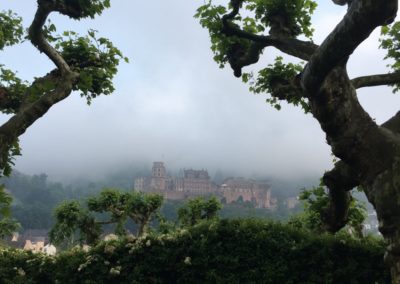 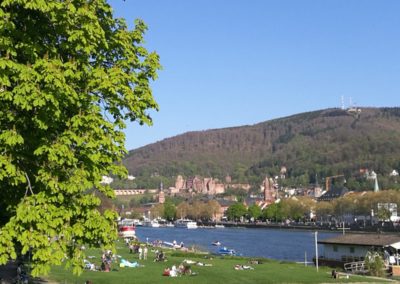 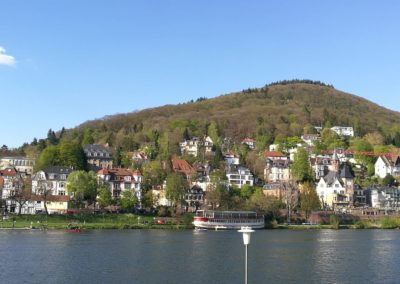 With over 600 years of tradition in academic teaching and research, Ruperto Carola has always been very enthusiastic about medicine and the life sciences. The University Hospital right on campus is one of the biggest and most renowned centres for health care and medical research in Germany and Europe. Many research groups and institutes within the faculty and its external partners, like DKFZ, EMBL or the Max-Planck Institutes, are eager to explore and develop new approaches in medical sciences. As the challenges in the field of medical care can´t be faced without innovative teaching, we are very committed to steadily improving our teaching methods and infrastructure, to create the best possible conditions for our students to make the most of their studies and talents.

Crucial for both, innovation in research and teaching, is international collaboration and exchange among countries and faculties on all levels. Especially the early exchange as students brings lots of advantages individually and for the international medical society. Events like the Spring Assembly are a great role model for this idea.

This Assembly’s topic “Medical Migration and Mobility” has great importance for the organisation and structure of health care in Germany and Europe. It represents one of the great challenges for the future health care systems, especially in a globalised world like ours. It also strongly interferes with other challenges like aging of society or lack of skilled workers. I am sure this topic provides lots of ideas for interesting discussions, sharing of opinions and development of new friendships.

I wish you all a joyful, rememberable time in Heidelberg and at our University, using this great opportunity to connect as European medical students. 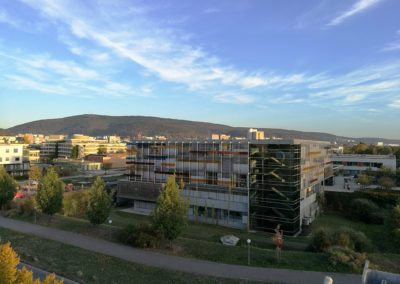 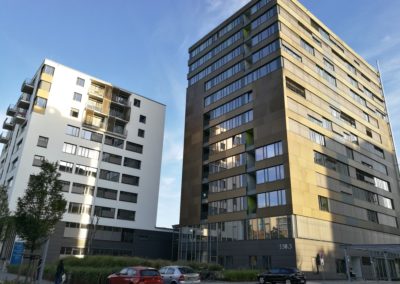 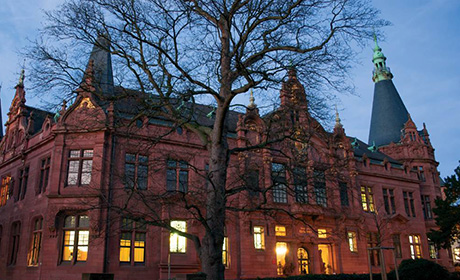 Heidelberg. The oldest university in Germany. One of the best medical schools in the world. And now the host city of EMSA 2019.

Heidelberg University, just like its corresponding medical faculty, was founded in 1386. It is Germany’s oldest university and is well known far beyond the country. It was the third university established in the Holy Roman Empire. More than 30.000 students are studying here, with about 20% being international students from more than 130 countries. Heidelberg University has three major campuses:  the humanities in the Old Town, the social sciences in the suburb Bergheim and the natural sciences and medicine in the “Neuenheimer Feld” quarter on the other side of the river.

The university consists of twelve faculties and offers degree programmes at undergraduate, graduate and postdoctoral levels in some 100 disciplines, ranging from law and economics to biochemistry and physics.

As of 2017, 56 Nobel Prize winners have been affiliated with Heidelberg, 15 of those in the field of medical research, making the university of Heidelberg, ranked by the number of Nobel Laureates, 1st in Germany, 4th in Europe and 13th worldwide.

The latest example would be that of Prof. Harald zur Hausen with his discovery of the connection between HPV and cervical cancer, paving the way for a protective vaccination.

Prof. Bert Sakmann received his Nobel prize for developing a groundbreaking method to study single ion-channels, which allows us to understand the basic concepts about neuroscience, for example.

And Heidelberg has not only put forward a considerable number of Nobel Laureates, but has also introduced modern scientific psychiatry, psychopharmacology, psychiatric genetics, environmental physics and modern sociology as scientific disciplines.

The undergraduate programs in law, dentistry, pharmacy and medicine are, unlike other degrees, not awarded with a Bachelor’s or Master’s Degree, but with the State Examination (which, however, is a central examination at Master’s level).

Besides all the academics, Heidelberg offers a lot of opportunities for free-time activities and hobbies. Whichever far-fetched sport-activity you may want to do, the odds are that you will be able to find exactly what you seek: not only can you practice football, basketball, karate and other mainstream sports, the university also offers sports such as fencing, aquapower and even quidditch!

We hope that you will enjoy your stay in Heidelberg and keep in mind, according to our university’s motto, to always stay open – “semper apertus” .